It's very unusual for me to have two blog posts in the same day, but this is the day to link up our progress on the Positivity Quilt Along. This quilt-along was started by Preeti of Sew Preeti Quilts to benefit Mercyful Quilts, which is overseen by Bernie. Today's link-up is being hosted by Bernie at her website Needle and Foot.

My Positivity quilt got off to a very slow start, mostly because I was having a hard time deciding on a color scheme. I considered several options (which you can read about in this blog post), then chose to go with turquoise and green plus signs with scrappy grey backgrounds. I had so many grey fabrics that I decided to try making a gradation of lighter background at the center of the quilt, shifting to darker around the outside. I have finished 36 blocks so far and decided that I like the effect so much that I won't be able to give this quilt away. Time to go to Plan B! 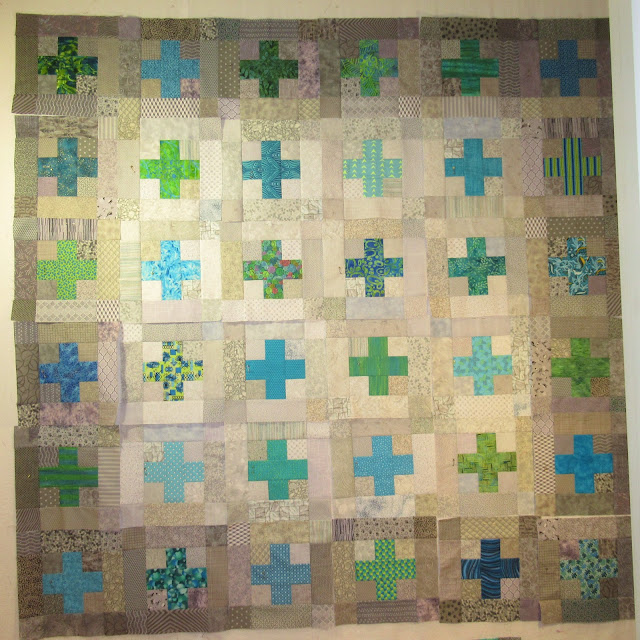 My second version of Positivity has tan backgrounds with blue plus signs. I'm trying to avoid repeating any of the fabrics and have made 30 blocks so far. 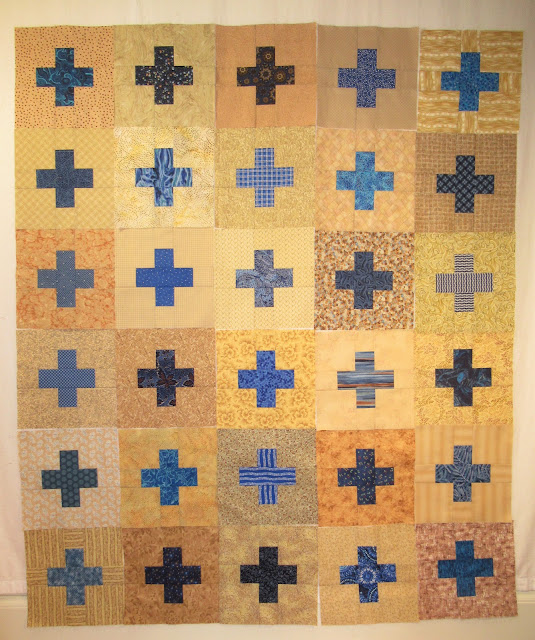 The first photo shows the blocks arranged randomly on the design wall. Then I decided to try the gradation idea again. I shifted the blocks around, aiming to get the lightest ones in the center and the darker at the corners. I'm not sure it's any better than the previous layout,  but it is a possibility for my final setting. 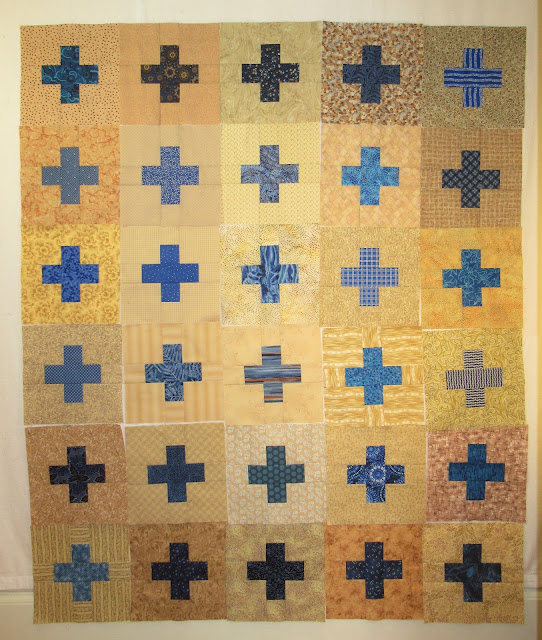 The biggest challenge I am facing with this QAL is going to be the finishing. As you can tell, I have no trouble cranking out piles of blocks. However, the final quilting is much more difficult and less enjoyable for me. That is especially true right now since our house is a disaster area with renovations going on. I have lost the use of the front room where I normally have a large table set up plus an extra sewing machine.
If there is anyone out there who loves to do machine quilting, but hasn't the time to make a quilt top for this quilt-along, I would be very happy to collaborate on this quilt. I could supply the quilt top, a backing, binding, and batting if needed. It might even mean I would have the time to make one more version of this quilt. If anyone reading this is interested in a joint project, I would love to hear from you!
Thanks so much to Preeti for hosting the Positivity QAL. She has lots of info and inspiration on her blog--it's not too late to join the fun! Thanks also to Bernie at Needle and Foot for hosting today's link-up.

Linking up with:
Positivity QAL Progress at Needle and Foot
Happy quilting everyone!