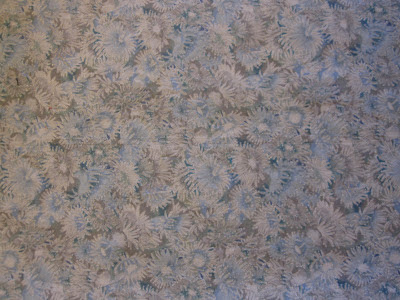 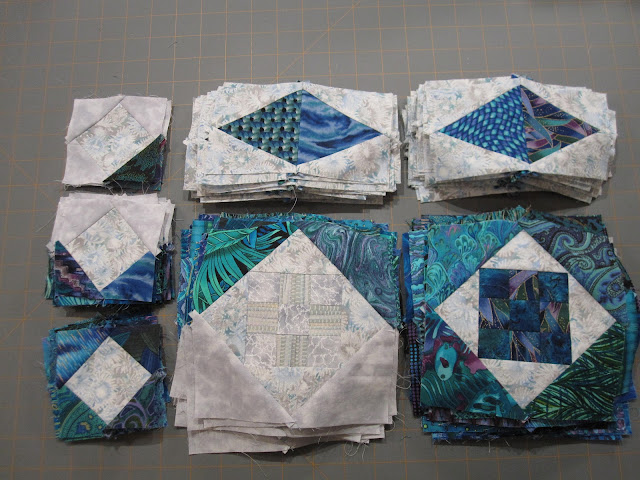 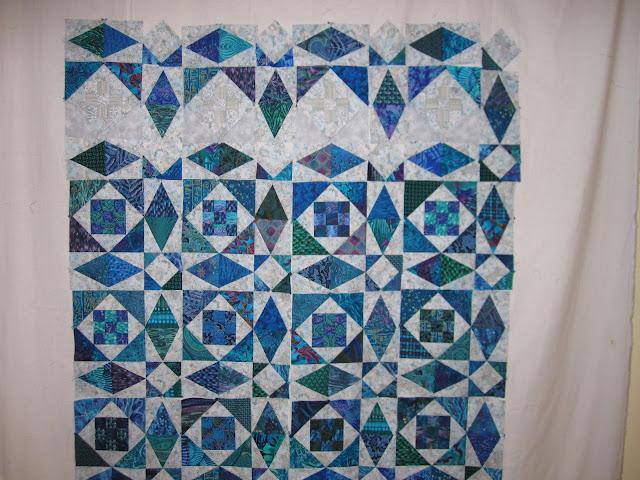 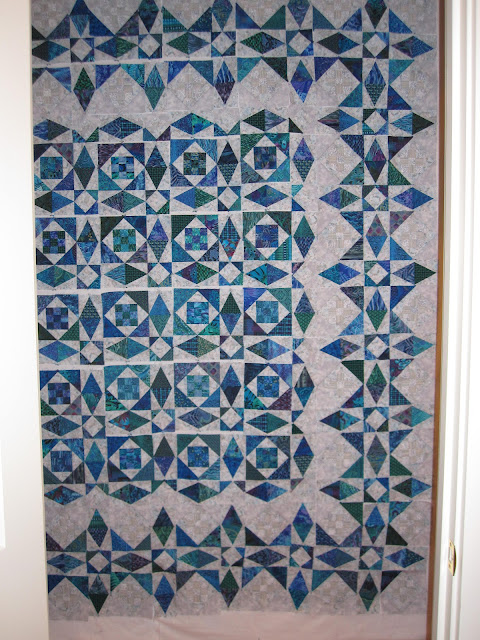 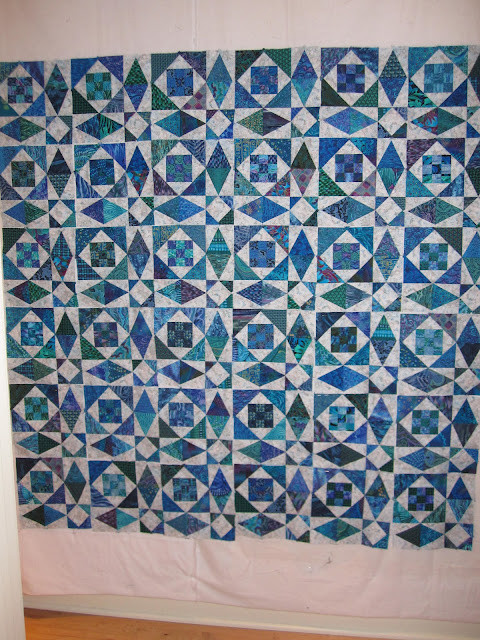 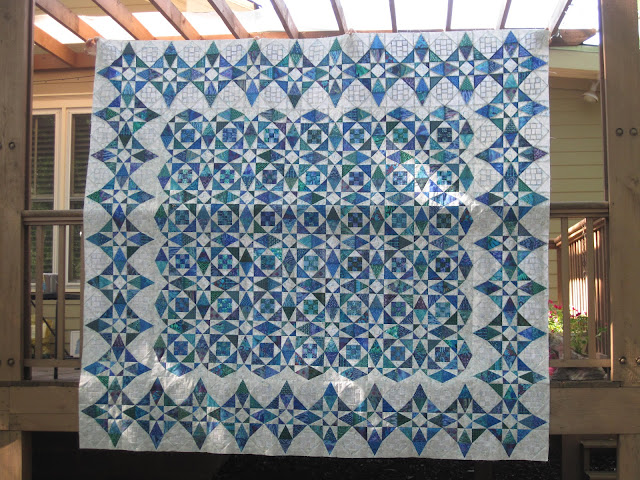 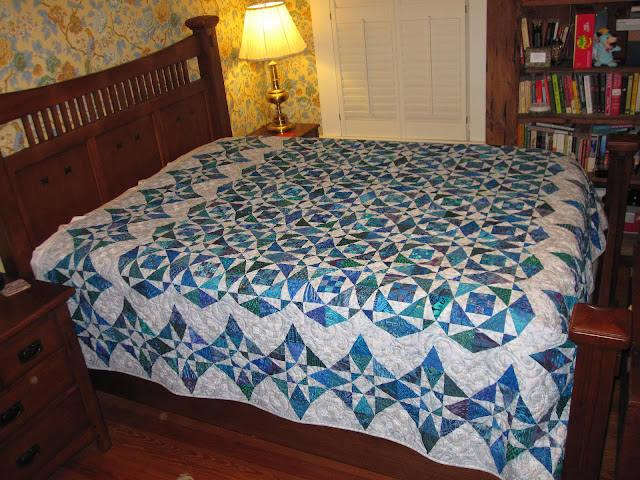 
There isn't anything new to show on my design wall this week, but I do have a new quilt on my bed.  I finished the binding on my Storm at Sea quilt yesterday! 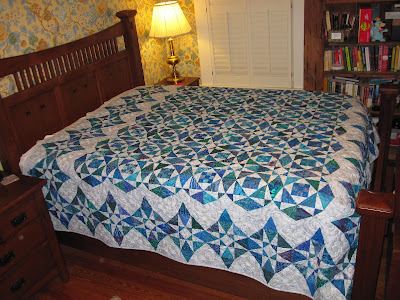 It was too windy outside yesterday to hang the quilt up for photos.  You can see a full shot of the unquilted top here.  I am thrilled to have it finished and on the bed.  My first thought once I laid it out on the bed (after "I can't believe that's finally done!") was "Now I need some matching pillowcases."  That answers the question of what to work on next.


The only change to my design wall this week is the addition of the newest Grandmother's Choice block.  I ended up with two versions of this block because I made a strip set and then used the template to cut the points. 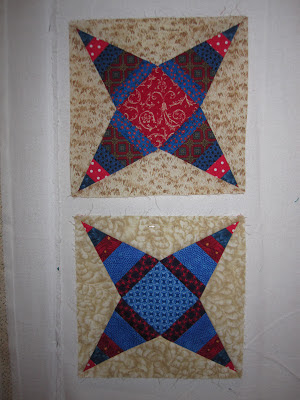 My sister and her husband are coming to visit this weekend, and I would love to finish the binding on my Storm at Sea quilt and get it on their bed.  Less than one side to finish stitching, but lots of other things to take care of around the house before then too.

The following Storm at Sea quilt was on display at the Georgia Quilt Show this past weekend.  I had also seen it at Paducah last April.  It was made by Sheri Schoenebeck of Wichita, KS, and she won the prize for best machine quilting.  Isn't it fantastic! 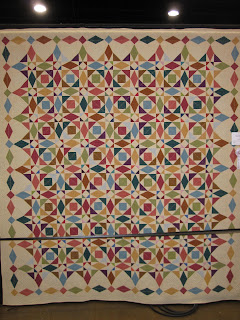 
It has been a quiet week as far as quilting.  I have been looking at a couple of patterns for possible Christmas gifts, but haven't gotten any further than planning.  I did make this week's Grandmother's Choice block, and I have also counted the yardage for the last few of those.  Since they are all different, I find it easier to calculate the amount of fabric used as I finish each block rather than waiting until they are all done.

I went to the Georgia Quilt Show in Duluth yesterday.  It wasn't the biggest quilt show ever, but there were some amazing quilts there.  Here are photos of a couple of my personal favorites.  I have been wanting to make an uneven pineapple quilt for quite some time.  I love the movement in this pattern.  This is called "My Color Wheel Exploded" by Dorinda Evans of Madison, MS. 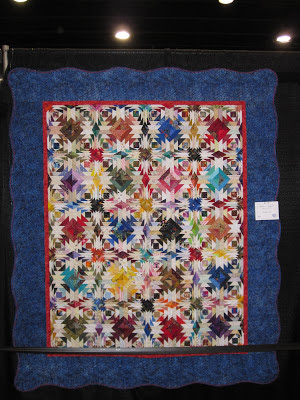 This leafy quilt also has great movement to it.  The way the blocks twist and turn gives the feeling of the leaves falling through the air.  Love the beautiful colors too!  This one is "Tumbling Leaves" by Connie Lord of Sparta, GA. 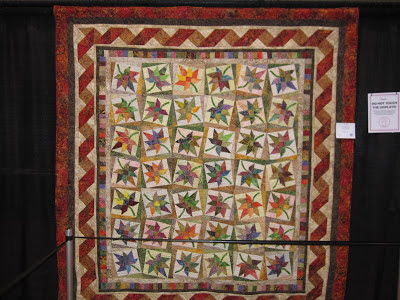 You can see photos of all the quilts entered in the show here.


There's not much that is new on my design wall this week.  I remade two  of the Grandmother's Choice blocks to give them better contrast.  I need to finish up this weeks block too.  I also made two more pinwheel blocks for my red, white & blue scrappy quilt. 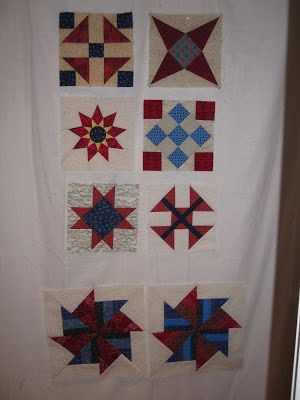 Now that it is starting to feel more like fall, I pulled out one of my favorite quilt tops.  The pattern is "Turning Leaves", and it was originally published in Quiltmaker magazine in 2002.  I just checked, and the pattern is still available here. 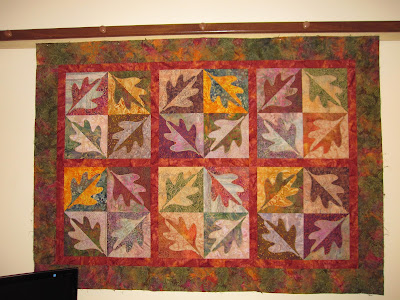 I am continuing to hand stitch the binding on my Storm at Sea quilt.  That has become my project while watching TV at night, since it is too big to carry with me anywhere else.  I can't wait to finish and get it on my bed!


I had really hoped to get my numbers headed back toward even, but haven't done much sewing the past two weeks.  Then there was the fabric clearance place I stopped at yesterday--a very dangerous place for me.  My stash has grown, and my wallet is a little lighter.   I did get some great fabrics though.  My main goal was to pick up some good light neutrals for backgrounds on scrappy quilts, and I managed to find several.  They are all remnant pieces, mostly around 1/4 - 1/2 yard long, and a few are 108 - 110" wide 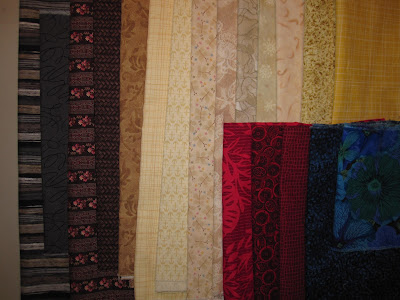 Now I just need to find (make) the time to use up some of my fabrics.  I love adding to the collection, but my shelves are close to full.

There hasn't been much change on my design wall this week.  I did manage to finish two more of the Grandmother's Choice blocks.  That keeps me up to date for the block-of-the-week program. 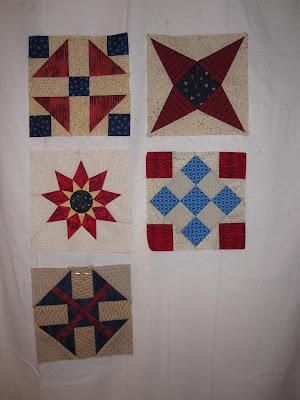 The majority of my sewing time this past week has been spent on the binding for my Storm at Sea quilt.  I got the binding stitched to the front of the quilt, and have been hand stitching the back during baseball games on TV.