Another year of the Rainbow Scrap Challenge is coming to an end. As always, there have been countless numbers of amazing rainbow quilts made by the participants. I am continually blown away by their creativity! I am also deeply appreciative of their continuing support and encouragement.
Of course, the main person to thank is Angela, who is our wonderful hostess of the RSC. She created the Rainbow Scrap Challenge in 2011 and has kept it going ever since. Thank you so much Angela for all your hard work through the years!
I started 2020 with two new projects for the RSC, plus one that carried over from 2019. Around mid-year, one unplanned rainbow quilt joined the lineup. It's almost the end of the year, and all four of my RSC projects are now finished quilt tops!
The quilt that carried over from 2019 was my Orange Peel Rainbow quilt. I started this hand applique project as a way to fill the time on my morning train rides to work. I made about a dozen blocks each month in the assigned RSC color. The last blocks were appliqued in mid-August, and they were all joined together a week later. 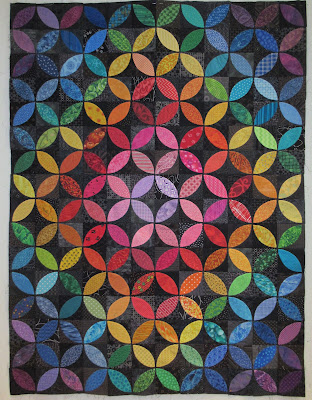 Orange Peel Rainbow, 36.5" x 48.5"
The unplanned rainbow project for the year was the Scrap Snap QAL. I discovered this pattern in May and couldn't resist jumping in, even though I was several months behind. The blocks were very easy to make, perfect during a pandemic. My original plan was to catch up on the months I had missed, then make the rest of the blocks each month as part of the RSC. It turned out that I couldn't resist making all the different colors over the summer. Before I knew what was happening, I had a finished quilt top that I call Rainbow Cascade. 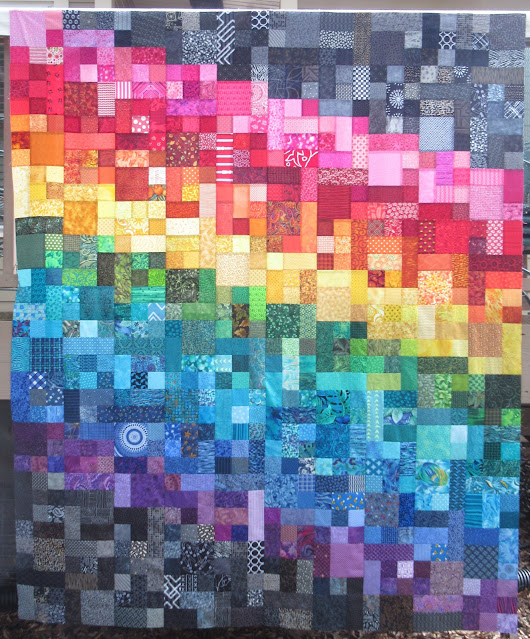 Rainbow Cascade, 60.5" x 72.5"
Of the two new projects planned for the RSC in 2020, the first to get assembled was the Scrappy Bear Paws. Each month I made a 14" block, although a couple of them were later deconstructed to use in the setting triangles when the quilt top came together. This quilt top was finished in November. 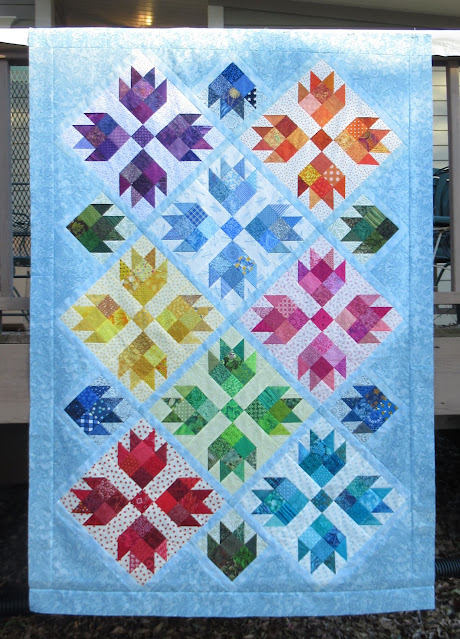 Scrappy Bear Paws, 47.75" x 68.75"
My last RSC project for 2020 was completed on Christmas Eve. My inspiration was the Square Dance block, shared by the Stashbuster Challenge at Border Creek Station. It's basically a double four-patch block with strategic color placement. I figured out a plan for my quilt at the very beginning of the year, then started making 30-32 blocks each month based on the Rainbow Scrap Challenge colors. I ended up with over 300 blocks, which have all been joined together. The only decision that hasn't been made yet is whether to use the blocks in one large throw quilt (60 x 80") or two smaller quilts (40 x 60"), which would be a good size for little kids. For now, I have two separate tops, but they could easily be joined together into one. This is my Rainbow Square Dance! 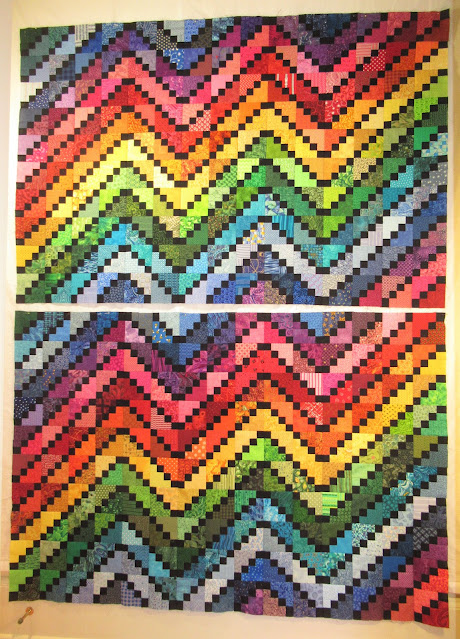 Rainbow Square Dance x 2, each top = 40" x 60"
I started participating in the RSC back in 2013, and I'm pretty sure that this is the first time I got all of my rainbow projects for the year assembled into tops before the end of the year. Of course, getting them quilted and finished may take much longer, but I'm thrilled to have all of these projects done to this stage.
I'm always looking for new ideas for future rainbow projects, and there are far too many wonderful designs out there! It's so hard to limit my choices for next year to a "reasonable" number. I've already started a new hand-piecing project, my Glorified 9-Patch blocks, which will carry over through 2021. 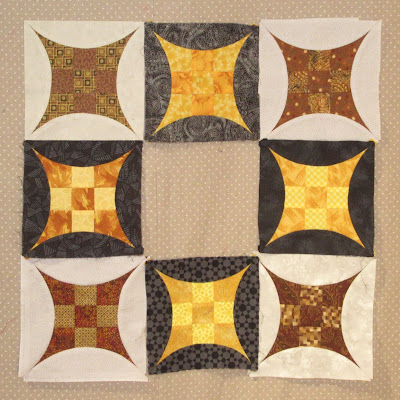 I will probably also do 2-3 more rainbow projects for next year. I've decided on one, but the others are still up in the air. Maybe I will have it figured out by next week!
I am linking up with the Rainbow Scrap Challenge on Saturday and with Oh Scrap! at Quilting is more fun than Housework on Sunday. I hope you are all staying well and getting lots of quilting done!