I had an afternoon available for quilting time over the weekend, but had some trouble figuring out what to work on. It needed to be something that didn't require a great deal of decision making. That lead me to pull out my Rolling 9-Patch project. 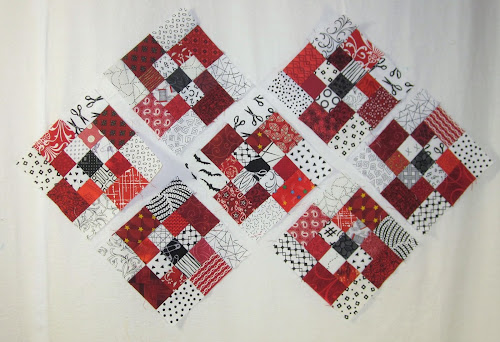 The last time I showed these blocks was February of 2019. They were started with some extra 9-patches left over from Bonnie Hunter's 2017 mystery "On Ringo Lake." I had been considering the Rolling 9-Patch pattern as a possible project for the Rainbow Scrap Challenge 2019, but set it aside because I had too many other RSC projects in the works.
There were plenty more 9-patches to use, plus rectangles already cut in reds and black-on-white prints. I made 11 more full blocks, plus two partial blocks for setting triangles, then began auditioning possible layouts. 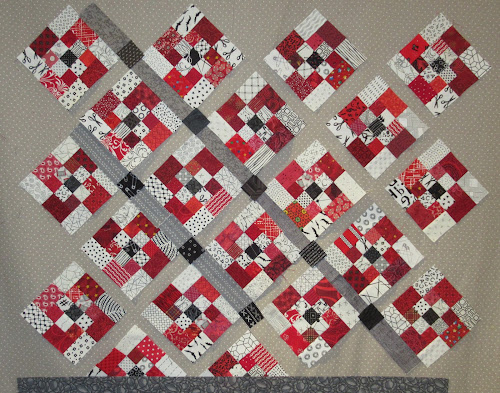 The first idea was to add grey sashing with black cornerstones. I would probably use a single grey fabric in an attempt to calm down the very busy blocks. 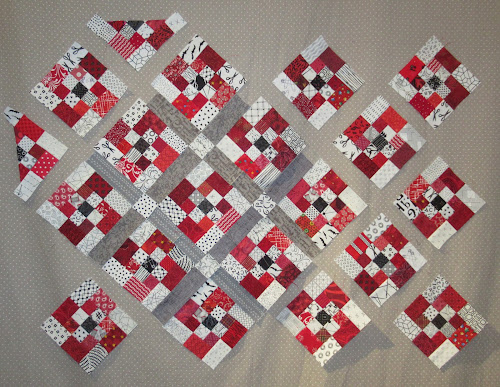 Version two still had grey sashing but switched the cornerstones to whites. 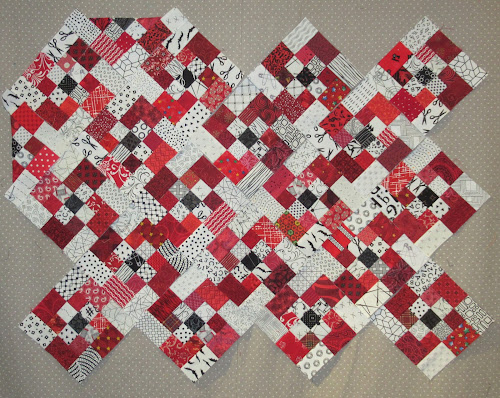 The third idea was to remove the sashing completely. This one worked best for me, even through it is definitely very busy. I love the white pinwheel effect where the blocks meet up. 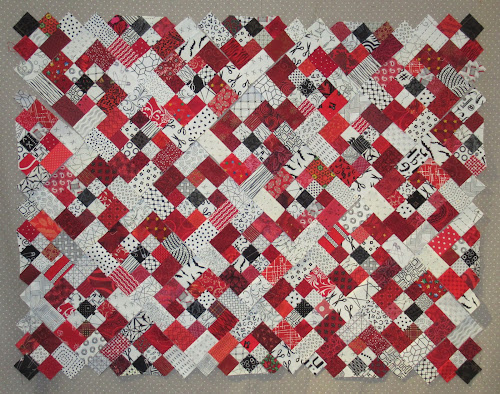 After more piecing, I had added all of the side and corner setting units to the design wall. Everything is ready to be joined together. The only problem is the size. Since my blocks finish at 5", when these are all stitched together, it will measure approximately 21" x 28". Unless I added very large borders, that would be too small for a baby quilt.
I'm debating whether to add another row to both the width and the length. That would bring it up to about 28" x 35". Add 3-4" in borders and it is a much more workable size for a baby quilt. I think that would require making 14 more full blocks plus two more side units. I've used up all but one of the original 9-patches.
On the other hand, I could leave it this size as a mini quilt. Why are decisions so hard sometimes? I'll let you know my choice when I figure it out!
Linking up with:
Design Wall Monday at Small Quilts and Doll Quilts
Monday Making at Love Laugh Quilt
Happy quilting everyone!