Super Bowl Sunday turned into a good day for chasing a squirrel. Not the animal with a fluffy tail, but a quilting project squirrel. If that term is new to you, here is a great explanation from Quilt Diva Julie’s blog:

A squirrel is a sudden distraction that pulls us away from projects already underway. Something so exciting that we drop what we’re doing to enjoy the unexpected. The term comes from the movie UP where the dog named Doug is talking and suddenly his head whips to one side as he shouts SQUIRREL and he’s off to chase it.
Kathy who blogs at kathysquilts was the starting point. She had mentioned a few days earlier that she would be participating in a Super Bowl Sunday mystery designed by Kris at Scrapdash.com. The mystery called for 1 yard pieces of five different fabrics. I debated whether to do it, tried to talk myself out of joining in, then decided at the last minute to go ahead. I started looking through my stash for fabrics about 10 minutes before the first clue was posted.
Because I got a late start and hadn't done any of the precutting, I didn't get as much done as scheduled. In fact, Kathy posted her finished quilt center this morning. I got four blocks finished and have the pieces for the remaining eight blocks cut out. 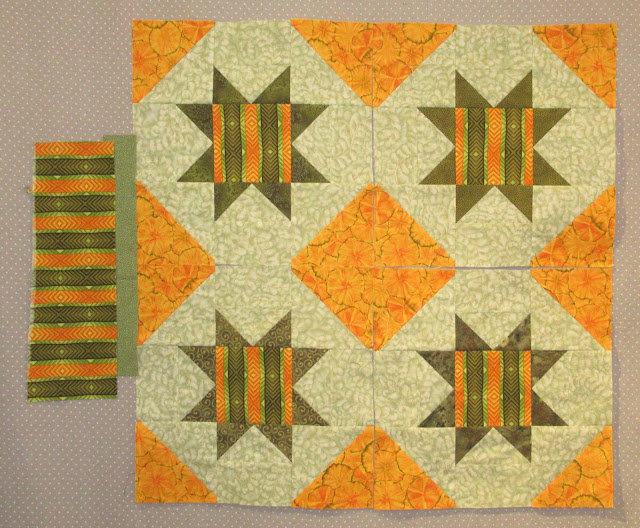 The large squares of bright orange where the corners meet up might be a little overwhelming. I decided to try adding sashing between the blocks. 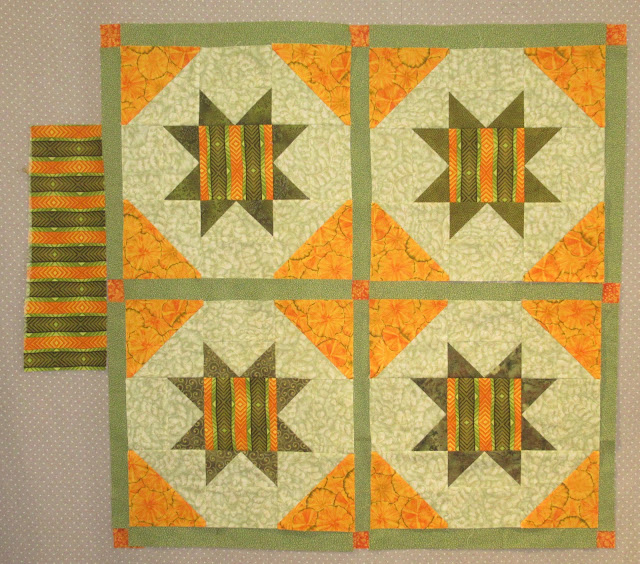 I'm not sure if I will use the sashing or not. I might dig through the stash a little more and see if there is a better green. In the meantime, I'm going to work on finishing the rest of those blocks.
If you are interested in this pattern, it will be up on the Scrapdash website for another week or so. You can also see photos of other people's version of the mystery on THIS PAGE.
Linking up with:
Design Wall Monday at Small Quilts and Doll Quilts
Monday Making at Love Laugh Quilt
DrEAMi (Drop Everything and Make It) at mmm quilts
Happy quilting everyone!