After more than three months of being ignored, my Charm Baskets blocks for the Rainbow Scrap Challenge became the primary project in my sewing room for the past couple of weeks. I made 60 more blocks in orange, light blue and light/bright green, bringing my total number of blocks to 227. Once all the blocks were made, I jumped right into joining them together, and now I have a completed quilt top! 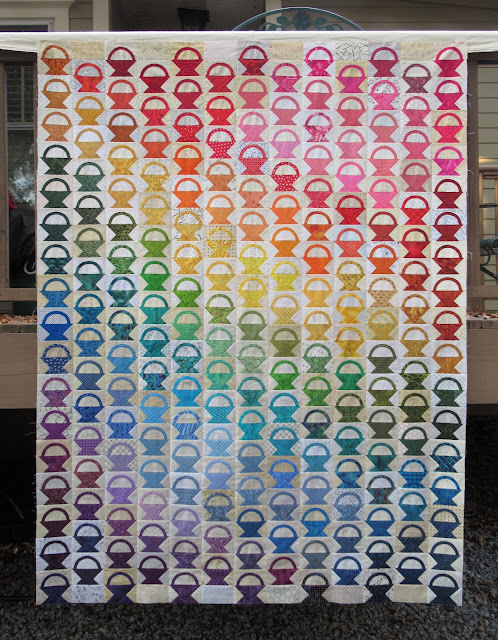 Charm Baskets, 52.75" x 69"
I was amazed at how quickly this top came together once all the blocks were made. I knew that I wanted the blocks arranged in a rainbow gradation, but not in straight horizontal or vertical lines of color. I had a total of 227 blocks and needed 215 of them for this arrangement (13 columns x 16 or 17 baskets per column.) I started at the lower left corner with the purple blocks, keeping the darkest ones at the outer edges. I added the blues next and kept working my way up and toward the right. After less than an hour, this was the initial layout on my design wall. It's a shadowy photo and not very straight, but you can get the idea. 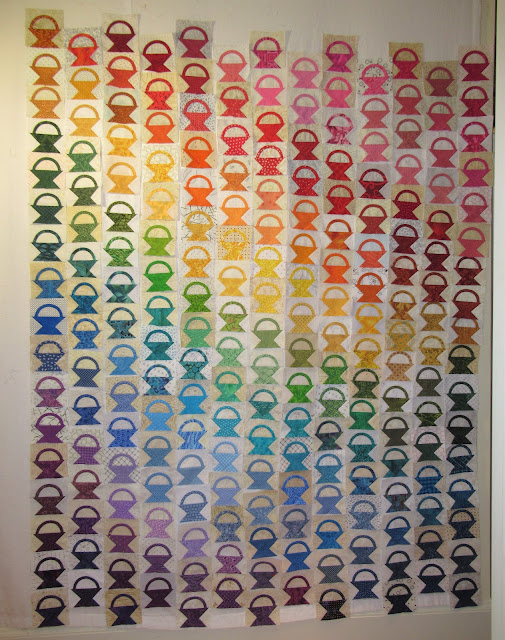 There was very little rearranging of blocks the next morning, mostly in the upper right corner. After that, it was time to cut some background rectangles for the offset columns, then I started sewing everything together. The basket blocks were stitched into vertical columns, then the columns were joined together. I did lots of pinning on those columns to keep everything lined up. 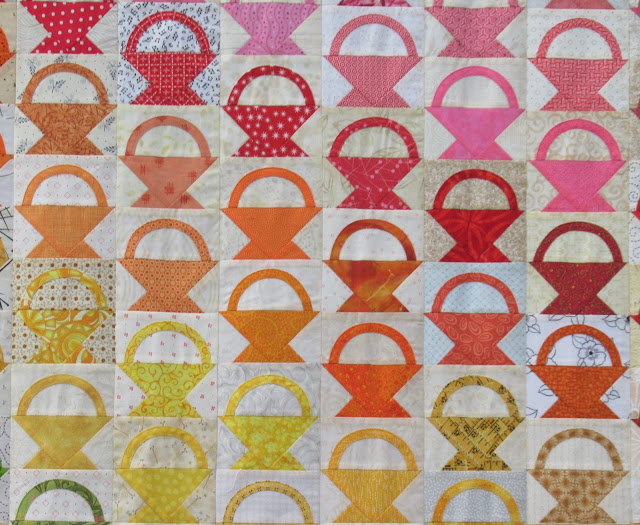 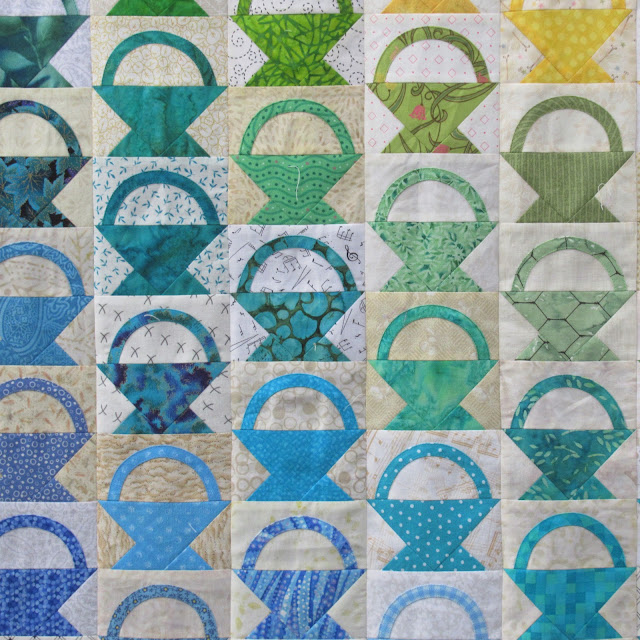 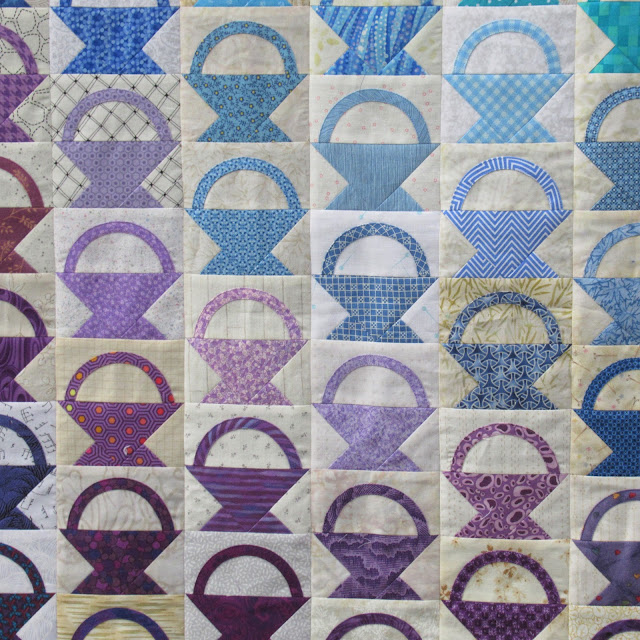 True confessions time--I've nearly really cared for basket quilts before! At least, that was true until I saw the Charm Basket pattern by Edyta Sitar at Laundry Basket Quilts. Those little 4" blocks in a wash of color were just irresistible! 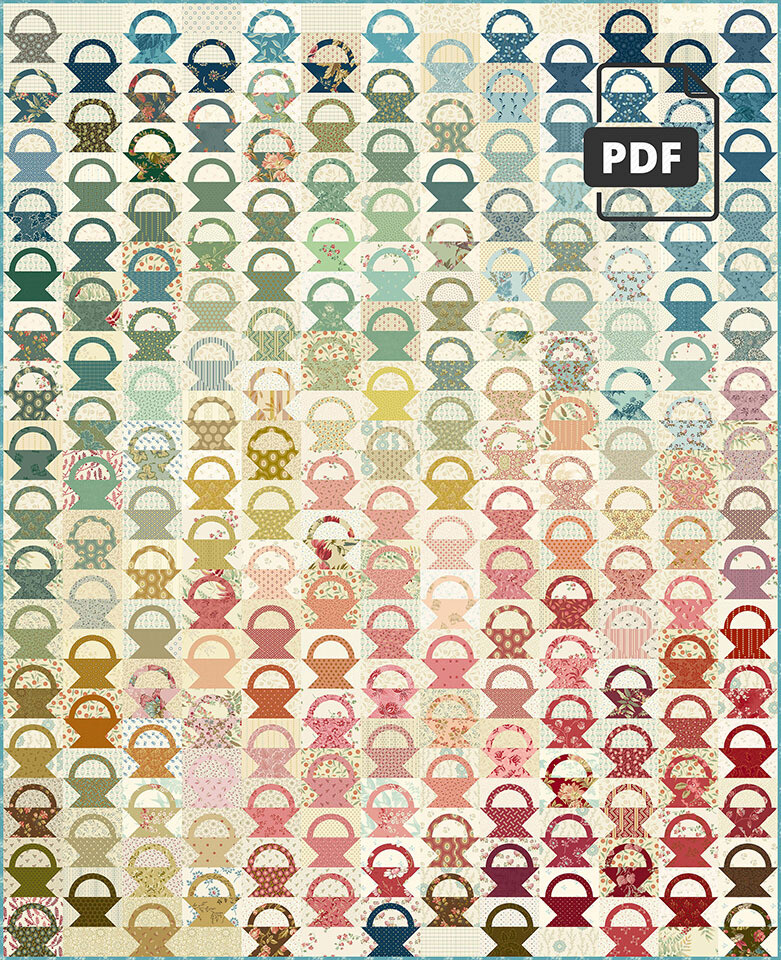 Charm Basket by Edyta Sitar, Laundry Basket Quilts
I made my first sample basket blocks in October, 2021, then continued making them in the Rainbow Scrap Challenge color of the month throughout 2022. The last basket blocks were made on October 29, 2022, and the quilt top was finished on November 2nd. I had so much fun making these blocks all year, and I'm very pleased with the result!
Linking up with:
Needle and Thread Thursday at My Quilt Infatuation
Finished or Not Friday at Alycia Quilts
Can I Get a Whoop Whoop at Confessions of a Fabric Addict
Peacock Party at Wendy's Quilts and More
Rainbow Scrap Challenge at So Scrappy
Oh Scrap! at Quilting is more fun than Housework
Midweek Makers at Quilt Fabrication
Wednesday Wait Loss at Inquiring Quilter
Happy quilting everyone!
Julie in GA
Posted by Julie in GA at 8:04 AM