It felt so good to get all of the orange blocks for my three Rainbow Scrap Challenge projects finished early in the month. That is definitely preferable to procrastinating until the last week, then scrambling to get them done in time! Here is the collection of orange scrappiness. 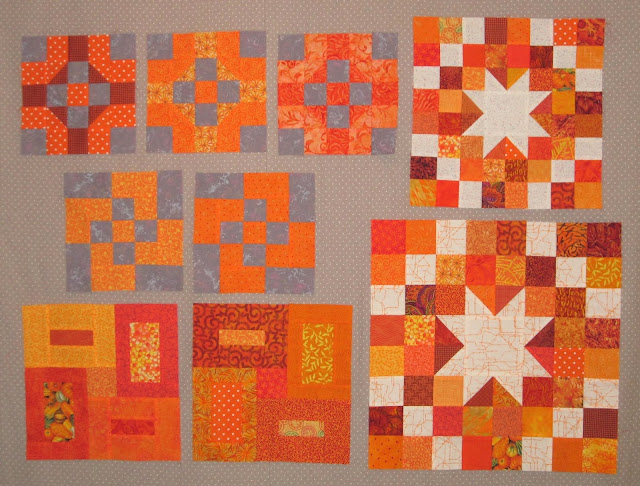 Since my blocks were done early, I pulled out an old project that included orange in the color scheme. My "Tell It to the Stars" quilt just needed the pieced border finished, then one last plain border added. The pieced border is now complete! You can only see a portion of the quilt because it is so large.

This quilt was started as a block of the month by Judy Laquidara at Patchwork Times in 2014. I was doing great with keeping up every month until late in the year when we got to the pieced border. It was around then that I realized I had used the wrong fabric for my setting triangles. My triangles are all pieced from black fabrics instead of the blue/turquoise prints that should have been used, making the quilt top seem very dark around the outside edges. It should look more like Judy's quilt below--our color schemes are very similar, except that the green in hers has been switched to turquoise in mine.


I had been planning to just keep going and live with my mistake, but I know I won't ever be satisfied with the way it looks. I'm considering removing the black setting triangles and remaking them in turquoise. The photo of my quilt top shows one sample triangle in turquoise along the side. It will be a lot of work, especially setting in the new triangles, but I know I will be much happier with the finished result.

I am linking up with the Rainbow Scrap Challenge on Saturday and at Oh Scrap! over at Quilting is more fun than Housework on Sunday. Be sure to check out all of the wonderful projects that everyone is sharing!